This blog post is about my time on September 1st, 2022, at the Content Magazine Pick-up Party in Los Gatos, California, for its 14.4 Profiles Edition.

It was a trip for me to be back in Los Gatos, long are the days of the sleepy, little, low-down, uptown, and now an up-side-down town, that used to take me to the mountains or beach where two cat statues always stood guarding this community. (see pictures at end of my fond memories)  As I was driving through Main Street people were out, dressed up, and shops and restaurants were packed with people. Los Gatos has changed and it was fantastic to be going to a party on a warm summer night!

I signed in to the event. Inside the museum were displays of art. The party was outside and that’s where a lot of people were. I headed into the museum first and looked around at all the beautiful art.

James is a featured artist in Content Magazine’s 14.4 Profiles Edition. James describes his art as being rooted in the contemporary inspiration of zenful living, ambient Visionary music, and meditation practice. He says it’s a skill set of flowing intuitive action.

My paintings are like an instrumental song with the focus on the contemplative experience more so than an actual object or subject. As colorful as our world/universe. Circles, as found in our natural existence represent wholeness or oneness and the colors give a visual vibration which is seen throughout life on this planet and abound in the cosmos.

Another memorable hometown resident I had the pleasure of meeting for the first time was Carl Foisy.

“It’s a creative wonderland,” he says. “The Bay Area is such a close-knit community when it comes to creativity. Everyone feels welcome.” He wasn’t getting that vibe from the East Coast’s “hustler culture,” and he didn’t feel it in Southern California, either. “The creative community of Southern California doesn’t care about you or what you’re doing unless you’re ‘somebody.’ I think that’s hella wack,” he says. “ ‘Nobodies’ are made into ‘somebodies’ every single day. It’s all about access and opportunity.”

Santa Clara University associate professor Kathy Aoki is also a featured visual artist in Content Magazine’s 14.4 Profiles Edition. Aoki is a multi-disciplinary visual artist who uses satire to critique the absurd value systems that dominate gender, pop culture, and politics. Her printmaking work can be found in major collections across the U.S. including the New York Metropolitan Museum of Art and the Fine Arts Museums of San Francisco. She has been an artist-in-residence at numerous venues including MacDowell (NH), the Headlands Center for the Arts (CA), and Frans Masereel Centrum (Belgium).

Greeting cards of work were given to the public for free. I collected two of them. Here, her satirical prowess are on full display. Her satire of Japanese artist Hokusai and his, The Great Wave off Kanagawa (1831), has her own subliminal inscription, “Destruction of Glamour, Palais, La La Land, and 2243.” Combined, this would mean a call-to-arms for the destruction of glamour in the Great Palace (palais [French]) of La La Land (Hollywood) known for its sexual abusive excess. Think #MeToo, Roman Polanski, and Woody Allen. See 18 U.S. Code §2243 [Sexual Abuse of a Minor or Ward in Federal Custody].

No, they’re not hippies … they were the employees of a business in downtown Los Gatos that made sandals more than 40 years ago. 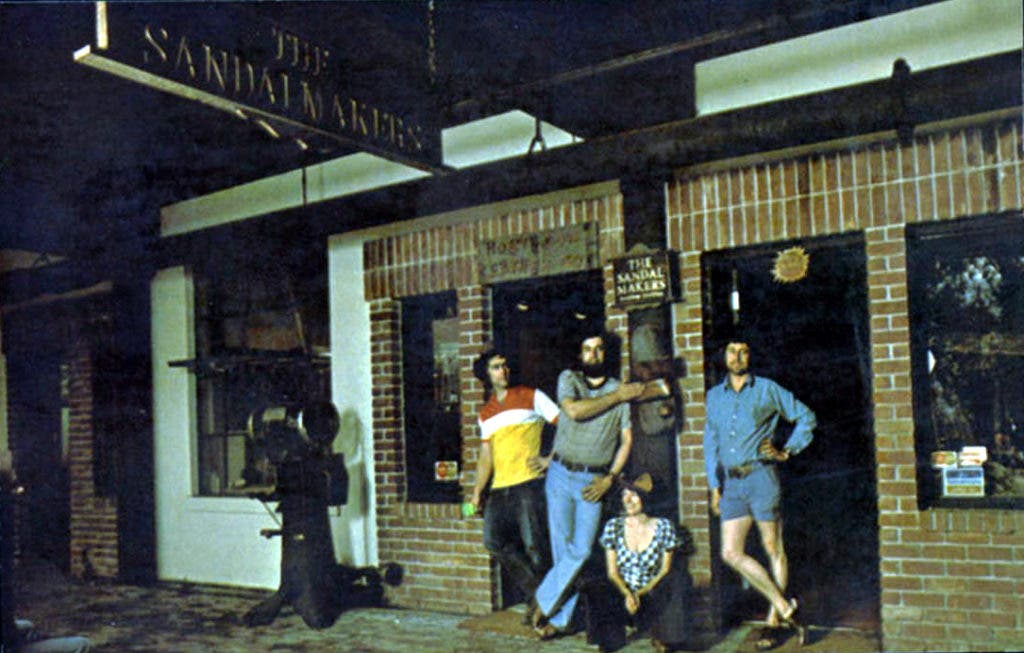 The 1970 Old Town Sandalmakers was a retail business on the lower level of Old Town in the ’60s and ’70s.

Yes, we dressed like this! It was a saloon and hey, it was the 80’s so Stevie Nicks and Madonna!

This now 75-acre estate, dubbed “the Cats” after the 8-foot cat sculptures that graced the front entrance, served as a creative retreat and home for Wood and Field until the mid-1950s.

American Bohemia explores their storied lives. Wood and Field were acclaimed literary figures and intellectuals, and their home, which became a gathering place for some of America’s most significant artists and writers including Robinson Jeffers, Ansel Adams, John Steinbeck, Ralph Stackpole, and Lincoln Steffens, according to the exhibit description.

Be sure to get your copy of Content Magazine’s 14.4 Profiles Edition before they run out!